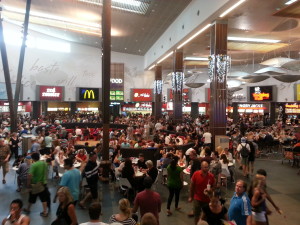 We arrived there around 11am. After we exited the highway, there was a traffic jam from the Highway exit to the entrance of shopping center. It was full of cars and was so busy! Moreover, inside the shopping centre, it was filled of people; almost every shop had people lining up in front of its cashier! That was so crazy! Everyone wanted to shop! For myself, I only bought a massage pillow. Well, I did some boxing day shopping too! 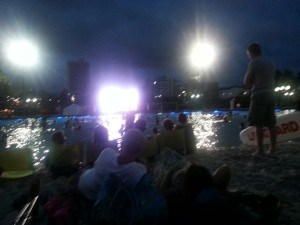 Last Saturday, I went to the Artificial beach  in southbank. Well, I did not go there for swimming. Actually, I went there for watching a movie,Elf.  The southbank management company placed a huge LED screen in the beach and played two movies every night. This was a part of Christmas Celebration in Southbank.

This was my first times to join this kind of Sunset Cinema. That was very cool. I sat on the beach and had some chats with my friends while we were watching the movie. That was so relaxing. Moreover, there were some other people who chose a cooler way to enjoy this sunset cinema. They swam while the movie was screening. In the hot weather, I believe they could cool down themselves and enjoy the movie at the same time!

I wish there will be this kind of activity next year. Although the movie is quite old, I have watched this movie on TV before, I like to have this kind of sunset cinema again. That was very comfortable to watch movie and that is free of charge too! 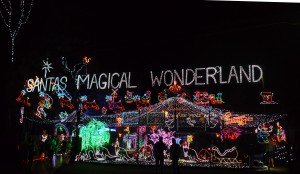 Thus, i did some researches for this. Finally, I found the information from 4KQ Radio.There is a list of Christmas Lights winners.   Well, I picked a winner’s home which is near my family. That is the 2nd Place Residential South ,16 Edith Street Kingston.

That is very impressive!!! The owner turned their home into a giant Christmas light display!!! The whole garden is full of Christmas lights. Moreover, it placed a little railway system in their garden too!

I believe your kids will love that! Please be quick to visit there, Christmas is only few days away. Those Christmas lights will be gone soon!

There is a little street in Calamvale where almost every home setup beautiful Christmas lights in their garden every year. Putting Christmas lights on your own house is a kind of Australian custom for Christmas .

Fortunately, I heard from my friends. There are some homes have huge Christmas lights in near suburbs. I need to do some research about this. 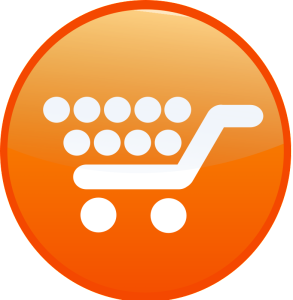 In Australia, there are a lot of people who are busy with buying Christmas presents for friends and relatives during this week. Thus, some shopping centers have extended their trading hours for Christmas shoppers, such as Chermside and Garden City. During weekdays, they open up to 9pm. On Thursday, they will open until mid-night. If you have not done your Christmas shopping yet, please keep on the trading hours of your local shopping centers. Maybe, you have some extra time to shop! 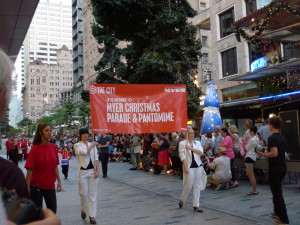 Yesterday, I went to Queen Street Mall to watch its Christmas Parade. Wow, there were a lot of people watching that! 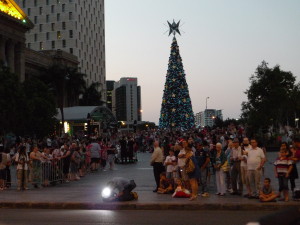 For the things to see, that was Christmas Parade. They must be about Christmas. 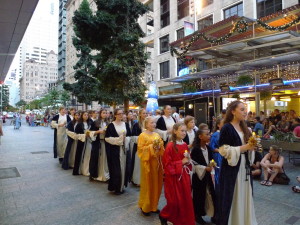 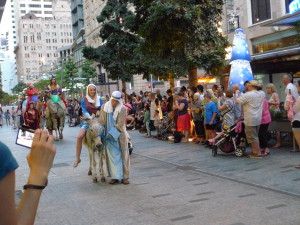 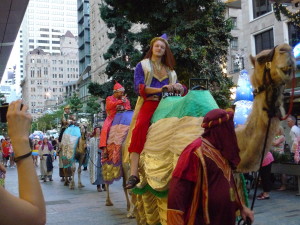 Also, please pay attention toon the photo. All animals were real! There were camels, sheep and donkeys in the parade!

Ho-Ho-Ho, the parade had Santa Claus with his sleigh. Look! The sleigh was pulled by real reindeer 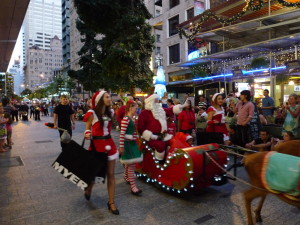 Besides the Christmas theme performance, there were some other performances such as dancing 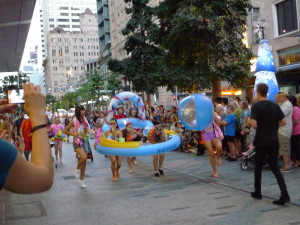 And an acrobatic gymnastics performance was in the parade too! This was very impressive, I loved it! 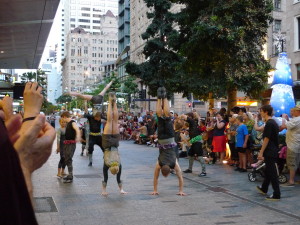 Well, this was a parade. Thus, it could be without a marching band! 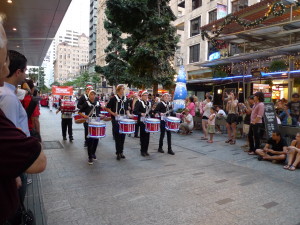 This was very impressive. There were great performances and  those cute real animals. If you are in the city around evening time, until 23/12, this parade will  take place in Queen Street Mall at 6.30pm everyday. 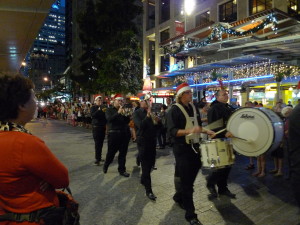 Last year, I went to Queen Street for watching Christmas Parade. That was very great! The parade has returned.  Since yesterday to 23/12, the parade will take part in Queen Street Mall at 6.30pm. I will go there to watch that next week. 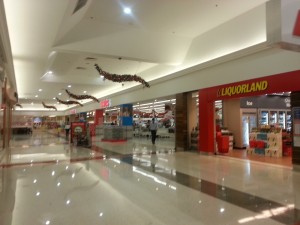 This evening, I went to the new Coles in Sunnybank Hills Shopping Town. There is quite huge! I felt very comfortable to do my shopping task. Well, the key part is $5Off Discount!  If you spend $50, then you will get $5 discount! That is cool! 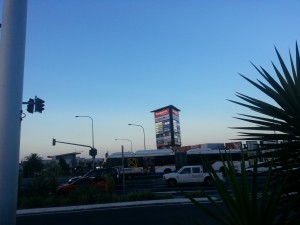 In our Sunnybank Hills and Calamvale area, there are three woolworth stores, but no other supermarket is in this area.

However, there is a good news. A new Coles and Kmart are opened in Sunnybank Shopping Town. Now, we have more choices! We believe that is good to have more competitions! 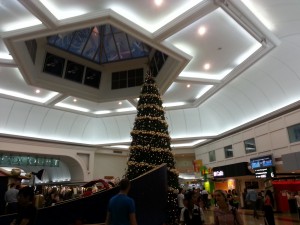 Last night, I went to Garden City for shopping. I found there was so busy,the most of parking spot is occupied. When I entered    the mall, there was full of people and a big Christmas Tree! Moreover, the most of shops were full of people.For example,  in BigW, I saw a lot of people were busy to buy their presents. But there was an interesting thing, I went to some retail shops of electrical goods. Those stores were relative quiet.  I do not know whether the current economic climate is not very good, the people are cautious to buy the expensive goods, such as electrical goods.