One year ago, we got flood hit our Brisbane city. Southbank and City area are affected. Toowong,  Milton, Rocklea,… a lot of areas are affected too. Even some areas have the water level at the roof top height.

This floods destroyed a lot of homes, and 33 people lost their life in this Queensland flood.

Our Brisbane people are very strong.  We had a super large volunteer clean up force. According to the  Wikipedia , that was around 55,00 people. They went every affected suburb in Brisbane to clean up.  During this year, we are working hard to re-build. I visited some areas which are affected by flood.  The most of them are   restored as before the flood arrived.

Unfortunately, there are some people lost their family and not everyone can get some money from the insurance claim to re-build their home.

Chicken Curry in a wok 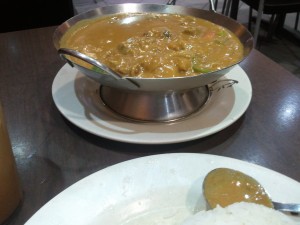 I think you may have Chicken Curry with Rice before. Most of times that is in a bowl. This Monday, I went to Coffee Square in Sunnybank. That is quite special, this one is in a wok. This is a good idea to keep the Chicken Curry always warm. Moreover, I like curry sauce too! That is not very hot. I recommend this one!