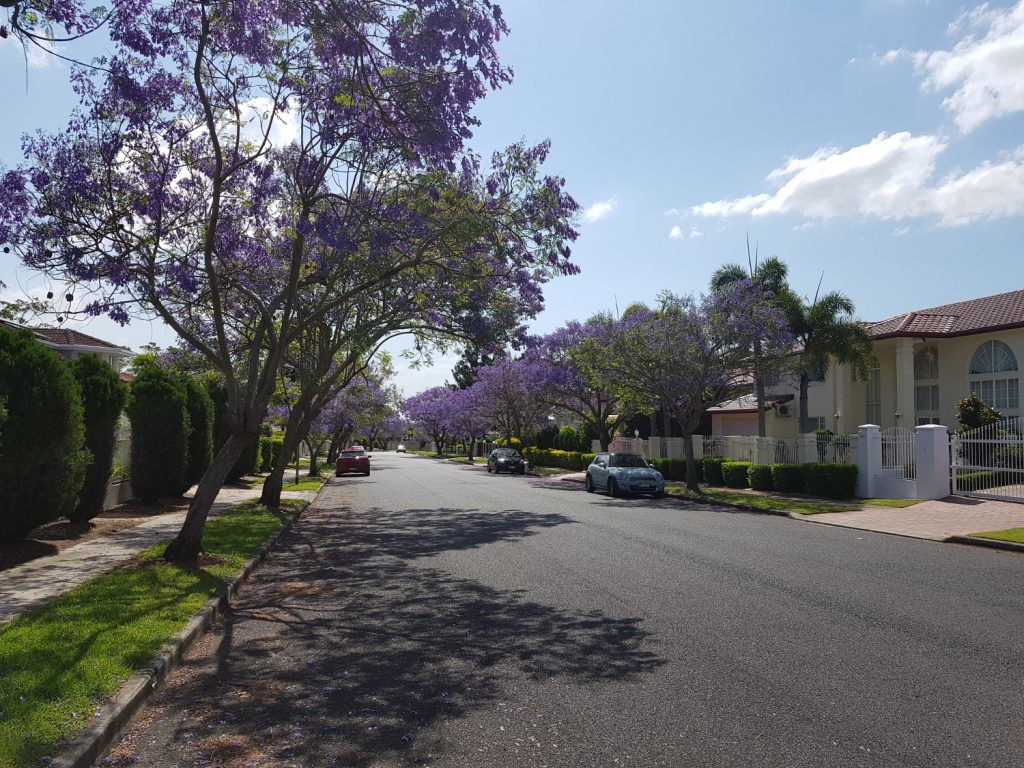 Now is Jacaranda Flowers Blooming Season in Brisbane. As I mentioned before, you can go to UQ or New Farm Park, even go to Grafton, there is a Jacaranda Festival. However, in Brisbane, that is easy, if you drive around your local area, you can find some streets will have a lot of Jacaranda tree. This weekend, we went to a local side street in Sunnybank Hills. I found the whole street has Jacaranda planted in both sides. That looks great. That is a Purple Rain! I love it! 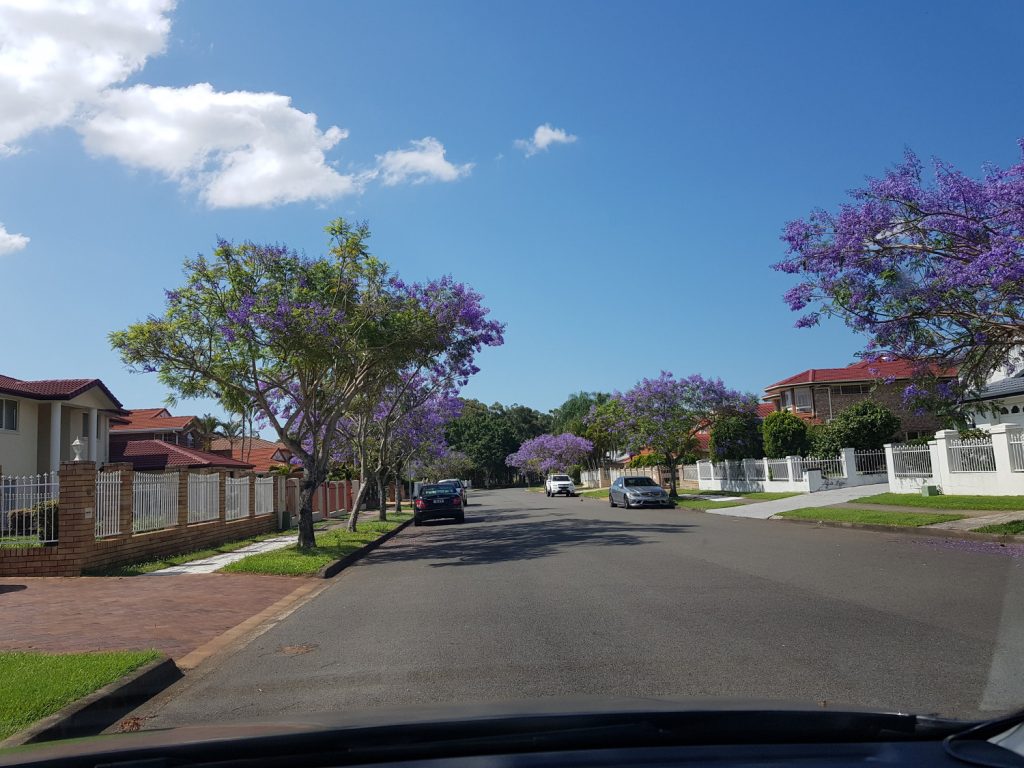 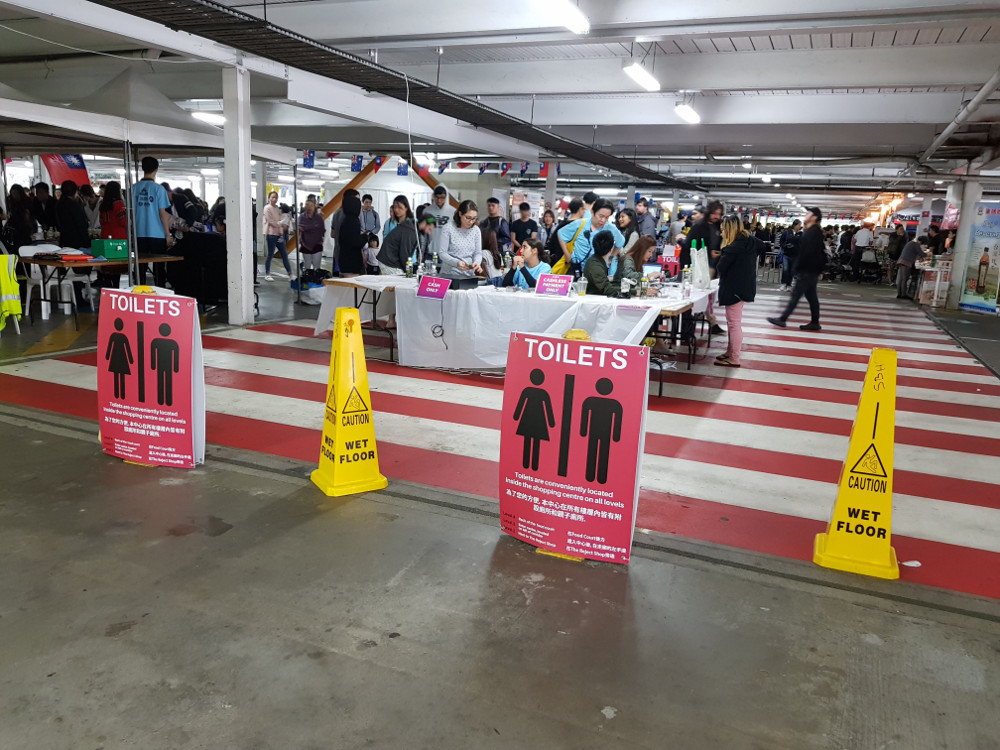 I went to Taiwan Festival 2018 on the Saturday before last week. We arrived there at around 4 pm. There was not too quiet, but not very crowded. Maybe, on that Friday, their online payment was not working very well. As a result, there was a long queue. I guess some people were losing interest to go there.

Because of the technical difficulties of the payment system, They started to accept any cash. Thus, we have no troubles for payments. They had a walk around their street market. We found around 20 stalls to sell Taiwanese food such as and Taiwanese drinks.

For us, firstly, we had a deep fried chicken fillet, that was very crispy! 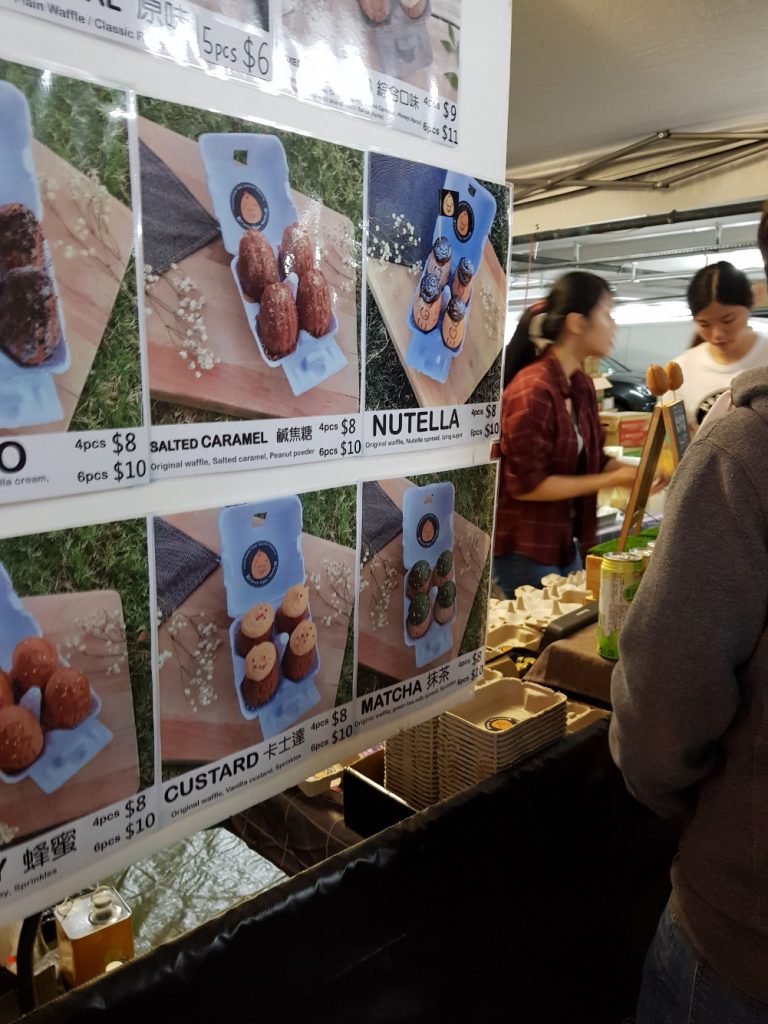 And then we tried Taiwanese egg waffles. They look like a real egg. That is fancy. It tastes really not bad, it tasted like waffles. I think that is ok. However, I have spent half an hour in the queue, that is a bit much. Moreover, four little waffles cost $9, that was a bit expensive for me too. Anyway, I went there for fun, spending a bit more is ok. 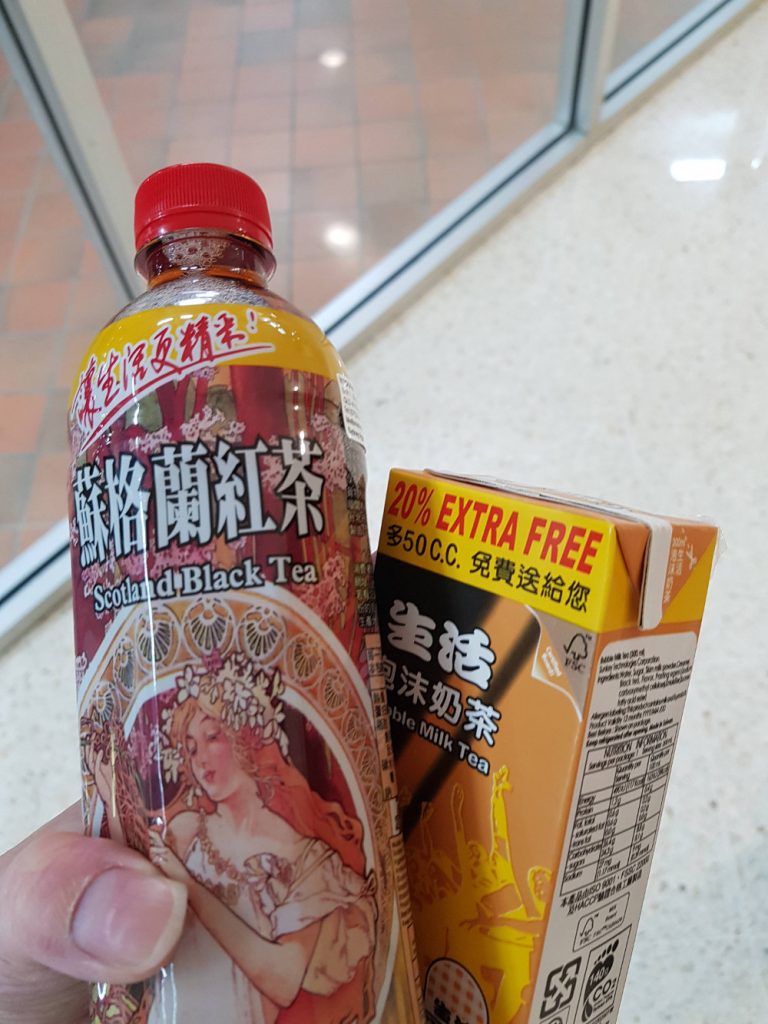 Besides, there was a distributor of Taiwanese bottled drinks in there for promotion. Their promotion price was great, a bottle and pack of Taiwanese drink is only for $1. I like it.
Besides food and drinks, there are also Taiwanese cultural performances. I saw a group of people performing fan dances on the stage. It seems that they have spent a lot of time rehearsing, they were well prepared

At around 9 pm, we went out to Sunnybank Hills to watch the fireworks display at the Taiwan Festival. It is also about ten minutes. It’s free, I certainly like it.
Fortunately, we went on Saturday, we did not encounter the problem of the payment system, and we lived nearby, so it was a bit of fun for. But some friends went there on Friday, because of the payment system issues, they had to spend the time to queue up to buy the food, they had some unpleasant experience. I hope that the organizer can learn from the experience, next times, they can handle it better and faster next time. 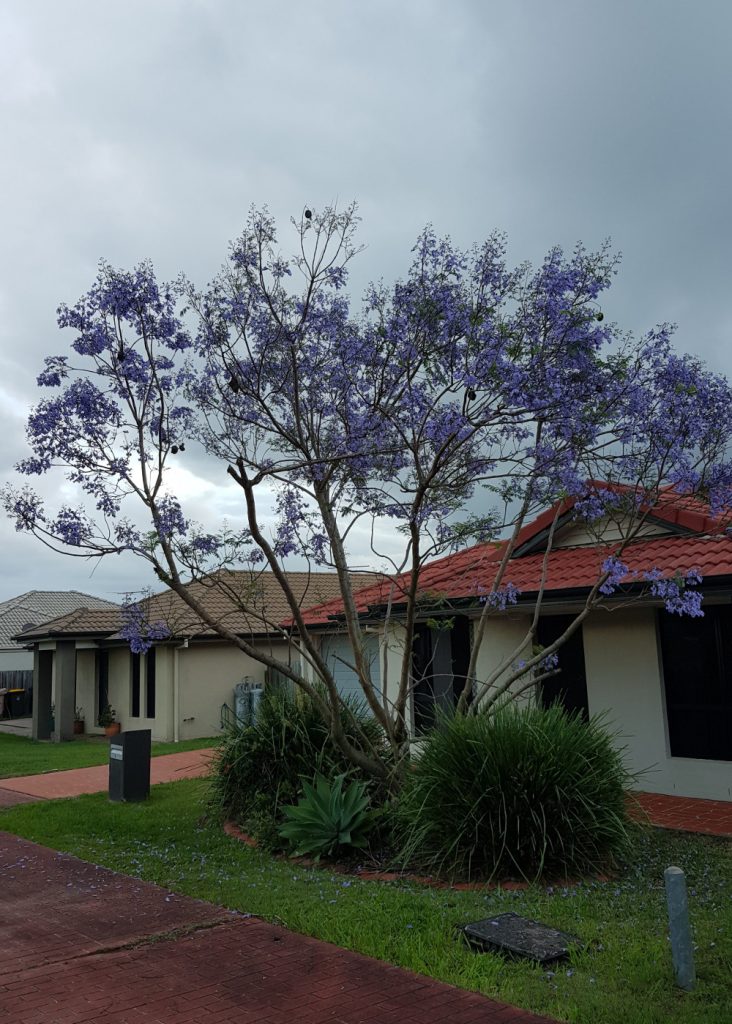 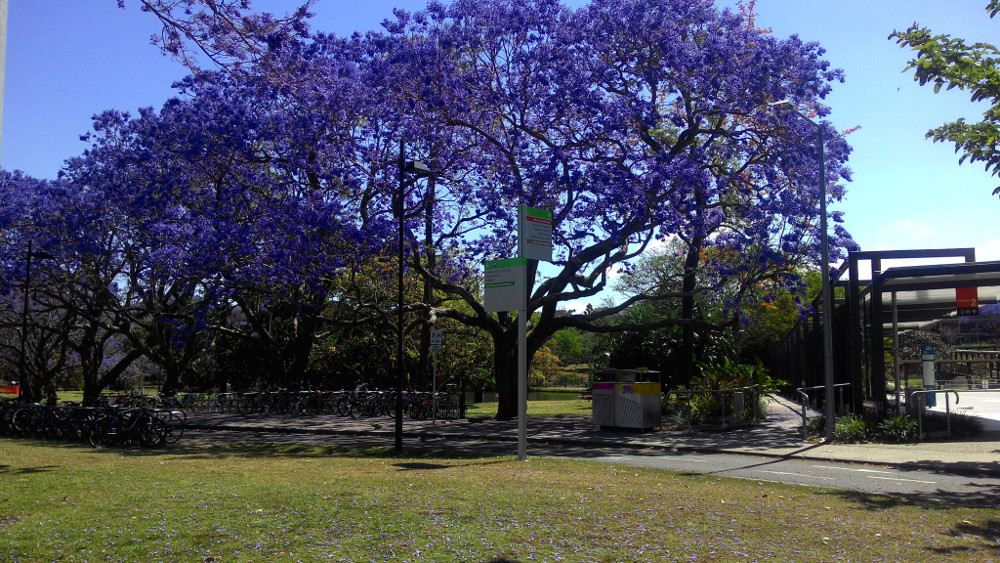 If you want to see more, I went to the Busway bus at the University of Queensland’s St Lucia in previous years , there are a number of Jacaranda planted along the footpath, I remember they are quite beautiful. If you are not satisfied, you can go to Grafton to attend the Jacaranda festival, which will be held from this Saturday to November 4. Someone told me there is a street where Jacaranda planted at both sides. Unfortunately, it is almost three hours drive from Brisbane, too far away. Maybe, we might go to Goodna, this Saturday and Sunday, there is also the Jacaranda festival, just a lot of small, Evan Marginson Park has several big jacarandas, but there is much closer to our home!

A few days ago, I opened my gallery in my photo. I found the photo I took during the 4th anniversary of 8 street. I think that is worth to blog about it. After our church service, we went to the garden city for lunch. That was great. I ordered ramen from Ikkairo ramen. Although that is a discounted $8 lunch, that was still a full-size ramen same as usual and with a small coke too. Also, the ramen was still tasted good. Lastly, there were more people than usual, but that is not too crowded, and I did not need to queue a long time for ordering. That was a happy lunch for $8 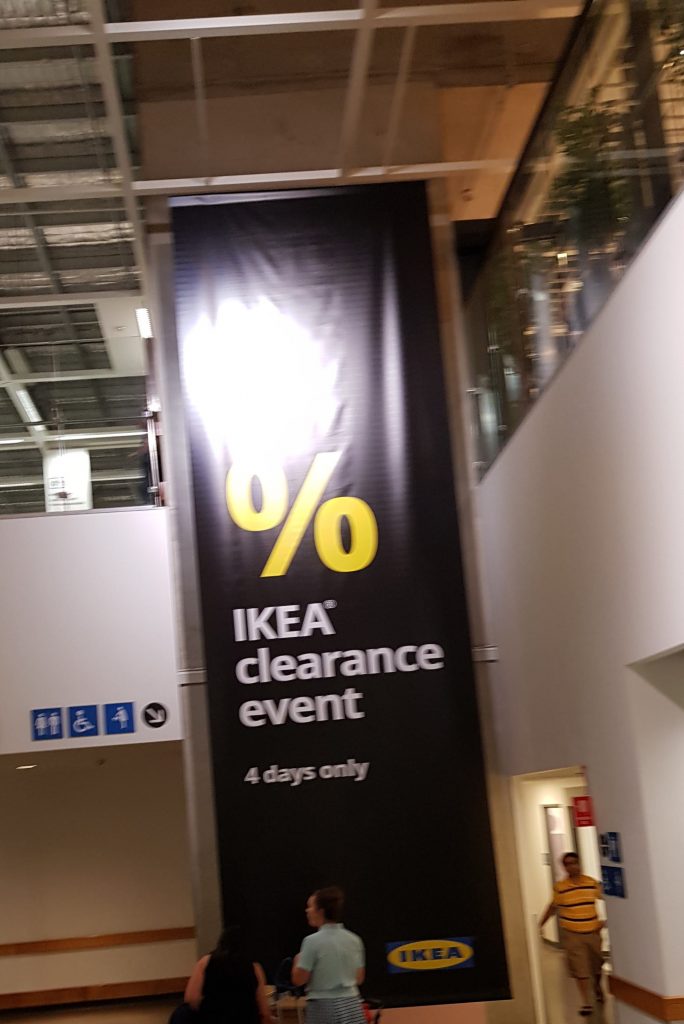 Today, IKEA started their Clearance sale until this Sunday(21/10). There are 400 products on sale and at least 40%off.
Thus, tonight, we went there. That was not very fun. I spent half an hour on the queue for ordering our dinner. Fortunately, after this hard work for queuing. We found a set of baby bed sheets for $10. It looks “high end” and just for $10. 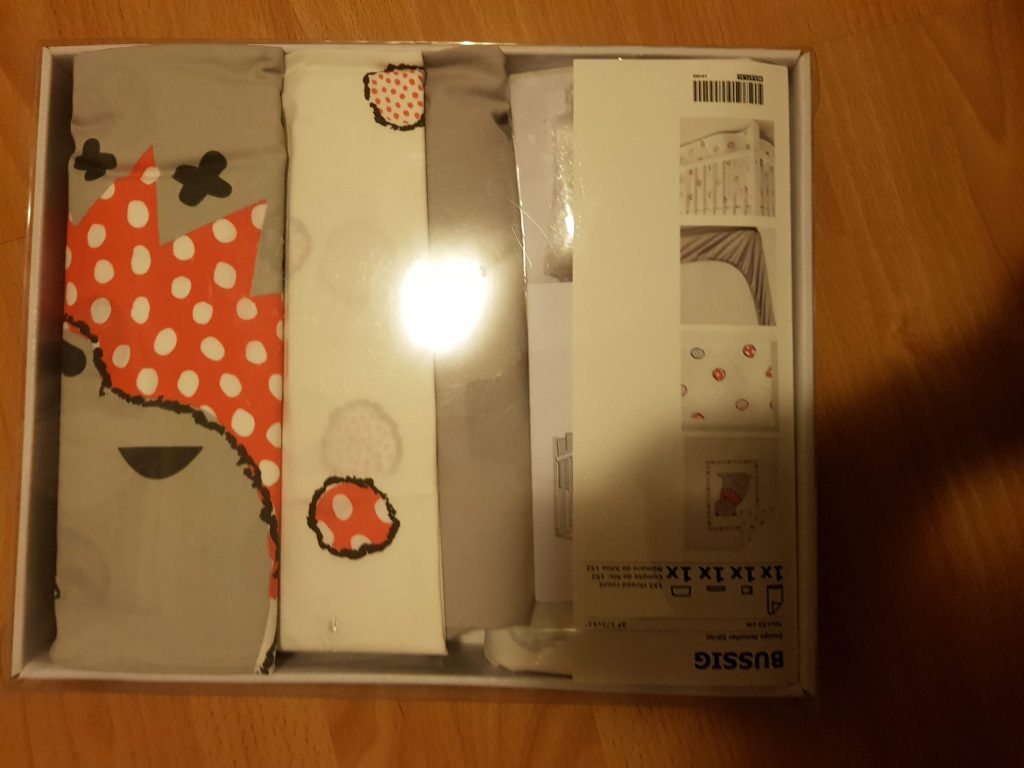 If they are considering to move to a new home, I think we can get more bargain deals than us.
I saw $399 for a three-seat soda, $99 bookshelf and $119 for a desk. They sound a good deal too. I have not much time to shop tonight, so I think I should miss a lot, there should be more good deals rather than just I mentioned above. 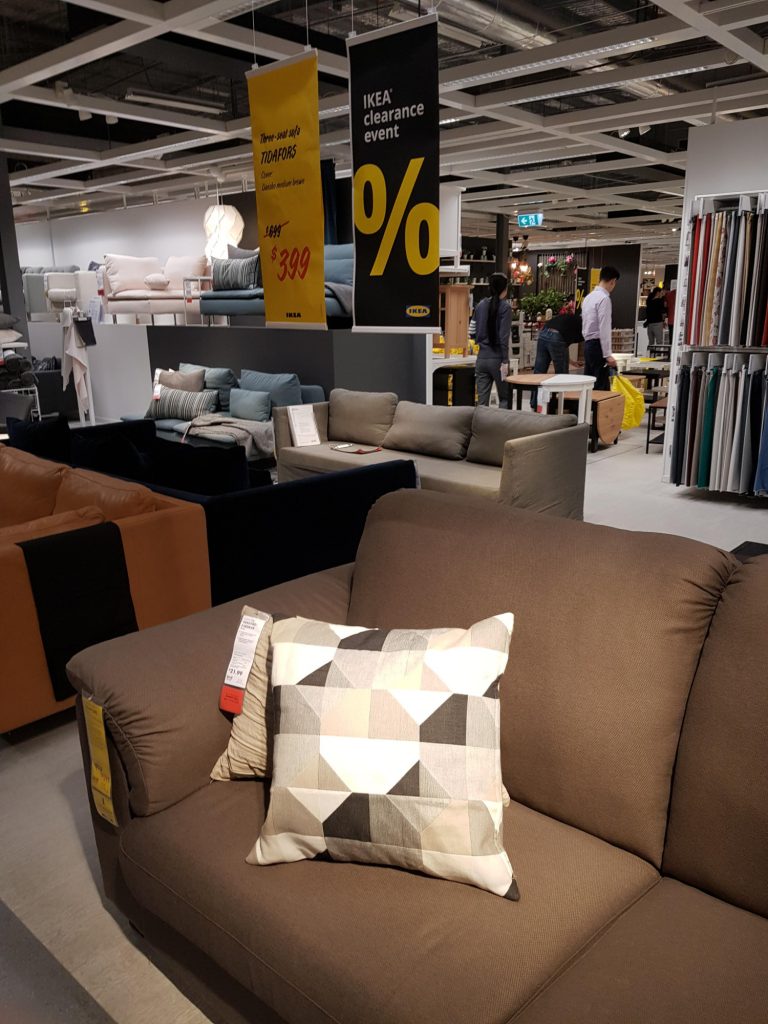 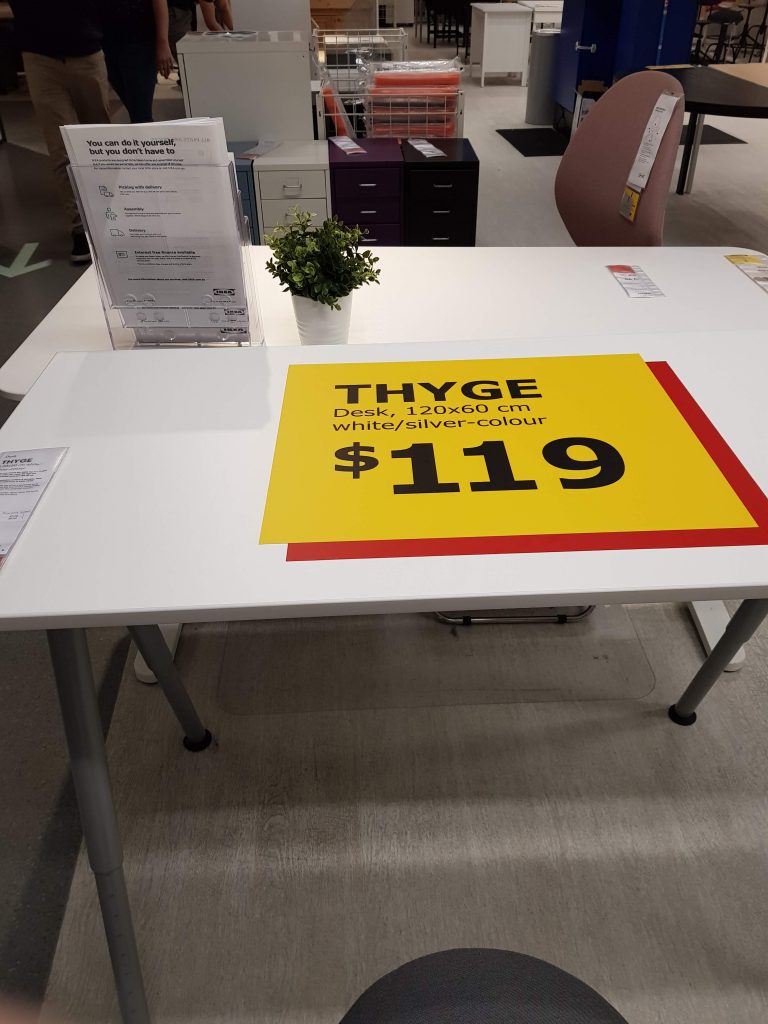 I think that is worth to go to their store and check out any good stuff for you if you consider moving to a new home and renovation. Well, If you are just looking for buying some new dining tableware or some towels, just some homeware, there may be not many choices for you.
END_OF_DOCUMENT_TOKEN_TO_BE_REPLACED 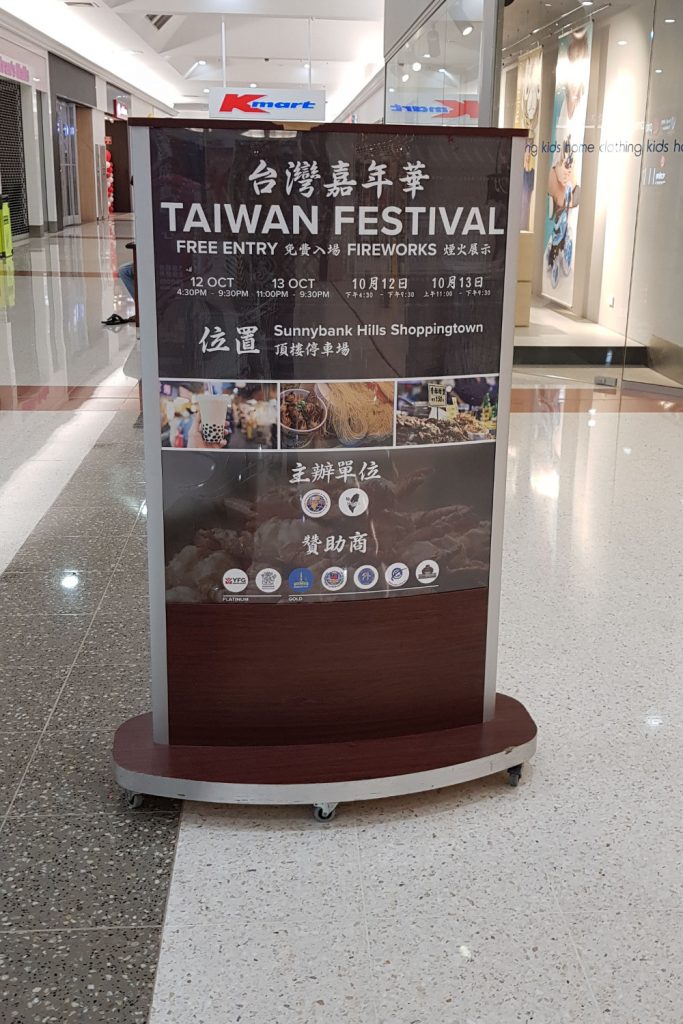 A few days ago, I was in Sunnybank Hills Shopping Center. I saw there was a poster about Taiwan Festival. I have been to this Festival for a few times, I am keen to attend this year too! This year, this festival will take place at the rooftop car park at Sunnybank Hills Shopping Center where is a good location. There are a lot of car parks and closed to us too! I love to be there his year. According to the poster, there will be a street market where they can have some Taiwanese food. Moreover, there will be some Taiwanese culture performance too. At both nights of the festival, there will be fireworks too! The most important part is a free entry!