Recently, I ate dessert in 8 Street in Garden City. That is somethings new for me; that is Chinese Egg Pancake. That sounds food from Northern China; even I had not seen that kind of Chinese Egg Pancake when I was in Hong Kong. So, I was keen to try that.
A few weeks, I bought one from there. That was the Traditional Chinese Style which is the cheapest one, $5.90. There are some choices too, such as Rolling Char Siu and Salmon Lover. However, that is more expensive. The one I ordered had sesame seed, shallot, traditional sauce, crisp, and Chinese ham sausage. That was quite of contents. I love the sauce inside. I found this kind of Chinese Egg Pancake is very similar to a crepe.

Moreover, if you want to buy one, please spare a few minutes for them to make a pancake. It took me five minutes for waiting last times. That was ok because that is a kind of fun to watch them cook a pancake. There is a big flat pan. And then the chief added the mixture of egg in the pan and sliced it carefully to make the mixture being a thin layer. Then the chief put the ingredients on the top of that. I found that looks like doing an act performance.
If you have not had this kind of Pancake before, I think that is fun to have it and watch the process of making a pancake! 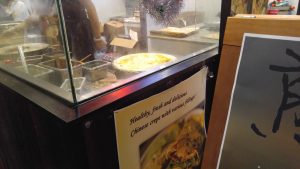