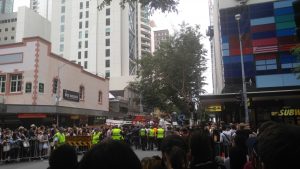 Thor 3 is filming in Village Roadshow Studios, Gold Coast.  Also, this week, the film crew drove up to Brisbane CBD to take some film shots. The site is near Mary and Margret Street. This afternoon, I and my wife was in City for an appointment. Thus, we took this opportunity to go this site. We did not see any super stars, such as Chris Hemsworth and Tom Hiddleston. We saw the crowd of fans at the street and some film crew members were working for film preparation.  I thought that would be a long wait for the stars coming.  Also, the crew members were very nice, I saw them gave a number of bottled waters to the crowd. At the end, we spent five minutes in there, then we went home. If you want to see them to film the movie, I think that is still possible, I checked the Mains Road website, there will be some road closures for this film until 31 August.